How does diabetes cause hearing loss?

It’s possible that the high blood glucose levels associated with diabetes cause damage to the small blood vessels in the inner ear, similar to the way in which diabetes can damage the eyes and the kidneys.  In the UK 1 in 6 people suffer from a hearing impairment whether a partial loss or a complete inability to hear.

A number of factors can be involved in causing a hearing loss;

Is diabetes a risk factor for deafness?

Diabetes has been linked to the development of hearing problems in various research studies.

Health experts medical researchers have debated the possible link between diabetes and hearing loss since the 1960s and early attempts to establish such as association were not very convincing. But in recent years there has been growing evidence to suggest diabetes contributes to hearing loss.

In June 2008, a study by the U.S. National Institutes of Health (NIH) published in the Annals of Internal Medicine, found a strong and consistent link between impaired hearing and diabetes.

After analysing the results of hearing tests given to a nationally representative sample of working-age adults in America, the investigators found participants with diabetes or pre-diabetes were more likely to have at least mild hearing loss in their ability to hear low-to-mid and high-frequency tones compared to people without diabetes.

The results remained the same after accounting for major factors known to affect hearing, such as age, noise exposure, and the use of certain medications.

If you would like to know more about hearing loss and diabetes we will be happy to help, pop along to Liverton Opticians, Charles Street, Newport for an informal chat and a hearing test.

On 13th May 2017 four guys hosted a charity ball to raise money and awareness for diabetes, they were over-whelmed when over 500+ people attended the conference suite of the Celtic Manor.   With the wine and drinks flowing it was easy to lose sight of why everyone was there.  Until a mum of a little boy called Peter, took to the stage and bravely told her story of the day her son Peter slipped into a coma after being diagnosed too late with Type 1 Diabetes, and urged every to be aware of the signs of such a silent disease, Thirst, Tiredness, Sudden Weight loss, going to the toilet frequently.

The reason these four friends have decided to carry out such a feat to tackle the Atlantic Ocean is to support their  long time friend Hugo who last year was diagnosed with Type 1 Diabetes.

The night was a great success to raise money and sponsorship for Monty, John, Hugo & Joel but also in highlighting the dangers of ignoring the signs that can be missed with diabetes and knowing that support and help is available if needed. 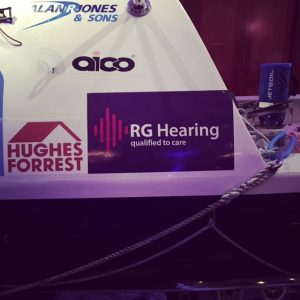 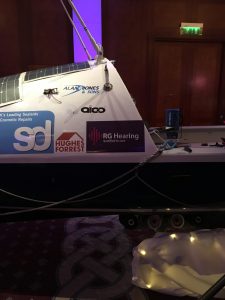 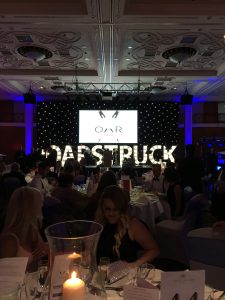 Thank you from us at RG Hearing & Livertons for a great night and we are proud to sponsor such a great cause.

Four guys (Hugo, Monty, Joel & John) who all went through school together, travelled together decided to show their support for their friend who was diagnosed with Diabetes type 1.   And together raise awareness and show strength in what can be deemed as a tough time for their closest friend, they now live, eat and sleep rowing.

And we look forward to supporting their rowing journey across the Atlantic – may I add in Shark Invested waters!!